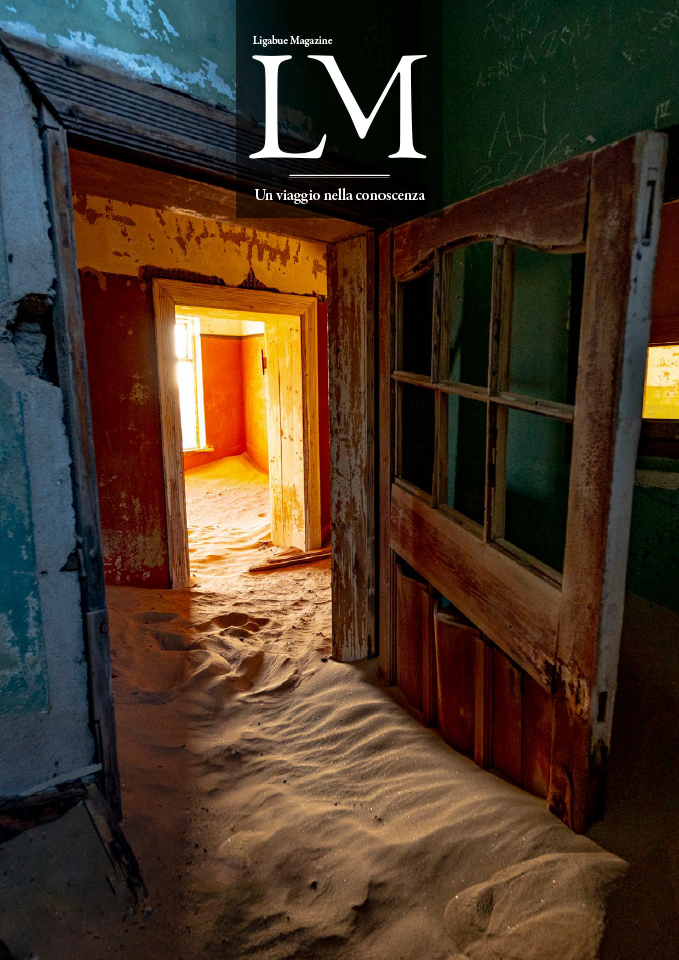 The Giancarlo Ligabue Foundation is continuing the work of the Study and Research Centre therefore, starting from January 2017, the “Ligabue Magazine” is published by the Foundation directly. The Magazine is a publication directed at those who are curious and interested in humankind and the planet that sustains us.

€ 29,50 / Year Subscribe now
How does a number of Ligabue Magazine

Each edition of the Magazine is prepared and organised like a geographic and scientific expedition. Although we use the modern mediums of satellite mapping and electronic instruments, we also face the risks of climate, human physical fatigue and the uncertainties of the environment. Creating the Magazine is like travelling through unexplored areas – or rediscovering paths which are barely known or only recently discovered – with the certainty that curiosity and intellectual enthusiasm for publication are our only true compass.

When the son of “Signor Krull” - a manufacturer from a Prussian family with operations in Venice and Treviso - showed me my first stone arrow point, I was amazed. I was even more surprised - at the time still quite a young lad - when he began to tell me about how he had found the arrowhead on the slopes of Montello, a hilly area in the Province of Treviso, and the kind of stories that a piece of chipped stone could tell. His account was apparently only the description of an object but in fact it contained the story of a man, of many men and their community which had preceded us and had left tokens of their existence. Since then I have never stopped interpreting traces of ancient life found near home and comparing them with evidence left by other people, animals, living beings or fossils all over the world. My story, like that of the Ligabue Study and Research Centre, all started from the curiosity that one man had awoken in me. Together we had tried to understand who had constructed, owned and used that arrow. We also tried to explore the landscape in which the owner lived, what he ate, what he believed in and how he behaved when faced with difficulties. Over the years these issues have become part of my studies and my life. Questions (and also answers) that I have shared with so many friends, collaborators and scientists in hundreds of expeditions, trips, studies and discoveries. At the Study Centre we are fortunate to be able to share our work with as many people as possible. This has led to the production of books, films and our magazine. The first issue of Ligabue Magazine came out 30 years ago. At the time there were no mobile phones, PCs or Internet speak; even laboratory research projects seemed more modest. What inspired us, however, was a belief in science that provides explanations, in research that describes the life of man and in an effort that might help us understand our environment and our future. That is why we have travelled, taken photographs and written articles. We have greeted and retold the story of New Man whenever we came across him in mysterious or at times degraded settings. The story of peoples and their instruments, art and cultures. The Study Centre has always acted in the awareness that the way to making discoveries is to work at the edges, understand the nuances, listen to the small sounds and pick up the last-disappearing vibrations in languages and cultural signs. Ligabue Magazine has mapped out their existence and our shared emotions, because I believe that the thrill of discovery can only be felt when shared. That's why, after 30 years, we are still “The magazine for people who travel the world”.

He performed excavations and field research for over 10 years, participating in international expeditions in the Democratic Republic of Congo (1983 and ‘84); in Tanzania (1986, ‘87 and ‘88); in the Sultanate of Oman in '89, in Ethiopia and in Mongolia in the Gobi desert, also searching for the remains of dinosaurs and primitive mammals (1991). In 1986, he participated in the expedition and excavations in the Olduvai Gorge, which led to the discovery of the fossilised remains of a hominid who lived 1.8 million years ago (OH62).

His academic studies were followed by professional activities as a science writer and presenter, for which he is most well-known, particularly as a television presenter (Passaggio a Nord Ovest, Superquark and Quark Speciale, Ulisse - Il piacere della scoperta among others).

He has made films and presented services from every continent, on archaeological and palaeontological sites, research centres, nature sanctuaries and also on endangered ethnic groups and cultures. He has written a number of popular science books with his father and also written for various daily newspapers and periodicals. He is a member of the Italian Human Palaeontology Institute, and the Ligabue Study and Research Centre in Venice. His activities as a popular science writer have led to him receiving prestigious national and international awards.

Fulco Pratesi. Journalist, environmentalist, illustrator, founder of the WWF Italy, of which he is now honorary president.
Donald C. Johanson. Member of the CSRL, discovered Australopithecus afarensis (nicknamed Lucy) in the 1970s.
Margherita Hack. Astrophysicist and popular science writer.
Vassos Karagheorghis. One of Cyprus’s leading archaeologists.
Philippe Taquet. Member of the CSRL, French palaeontologist, President of the French Academy of Sciences.
Alvise Zorzi. Venetian journalist and writer, member of the Unesco committee for Venice.
Jane Goodall. Primatologist, ethologist, anthropologist; one of the world’s leading chimpanzee experts.
Eibl-Eibelsfeldt. Student of Konrad Lorenz, regarded as one of the founders of modern human ethology.

How does a number of Ligabue Magazine

Each edition of the Magazine is prepared and organised like a geographic and scientific expedition. Although we use the modern mediums of satellite mapping and electronic instruments, we also face the risks of climate, human physical fatigue and the uncertainties of the environment. Creating the Magazine is like travelling through unexplored areas – or rediscovering paths which are barely known or only recently discovered – with the certainty that curiosity and intellectual enthusiasm for publication are our only true compass.

Each reader who takes the journey with us among the articles and images knows that the desire to discover and understand is the most important aspect of all. The texts and photographs are the combined result of meeting other people, personal visits to the places, history, legends and the documents examined each time. The recipe of a success which has lasted for thirty years needs real and virtual maps and scientific research, combined at times with a little “serendipity” which – as we all know – assists discoveries and revelations.

It has always been so for the academics and collaborators of the Ligabue Study Centre who have made research – throughout the deserts, mountains and forests of the world, in laboratories, museums and universities – and constant study the mutual hallmarks of their activities.

The Magazine is based on the suggestions which Alberto Angela brings back with every voyage he makes, on letters received from archaeologists in Peru, on the ideas of scientists living among the icebergs of the South Pole, on the advice offered by biologists who study the signs of evolution and changes and the historians who know how to bring archives and documents to life.

Another vital ingredient, however, is the contribution of readers to the editorial office, the ideas of the young academics and researchers at the Study Centre, and even the curiosity of comparing several historical research projects with new methods and instruments. Each edition of the Magazine – as happened in the past for cartographers who had to learn about and discover the boundaries of the new world - is submitted by the editorial staff and graphic artists to a lengthy and continuous quality test before being printed or published on the Internet.

This is why – whether it is archaeological research at the ancient burial sites of the Asian steppes, evolution of the species, history, geographical discoveries, the travels of anthropologists and researchers, detailed studies of Venetian culture or the dizzying heights of astronomy - the Magazine is a unique travelling companion.

Through the app you will always be updated on the latest initiatives and you can take advantage of multimedia content.